In Holland we have a saying

"The sun rises for free"

Solar energy and heat pump energy both leave virtually NO carbon footprint. However the reason why it is not solely used without a gas or electricity boost is because it is classified as an UNCONTROLABLE energy source.

Uncontrollable energy sources are nearly always stored in a tank and from that storage tank (or batteries when speaking of photovoltaic panels (PV)) made available to the user. This makes it possible to control the output temperature and to store it for periods when the weather conditions are not so favourable.

Irradiance or Insolation (not to be confused with insulation), is the amount of sunshine that reaches a surface area such as a roof, over a given time. It is measured in mega joules or kilowatts per square meter. Insolation varies throughout the year.

The gas or electricity boost will work harder in the cooler months and the solar heating will take over producing the energy during the summer months. 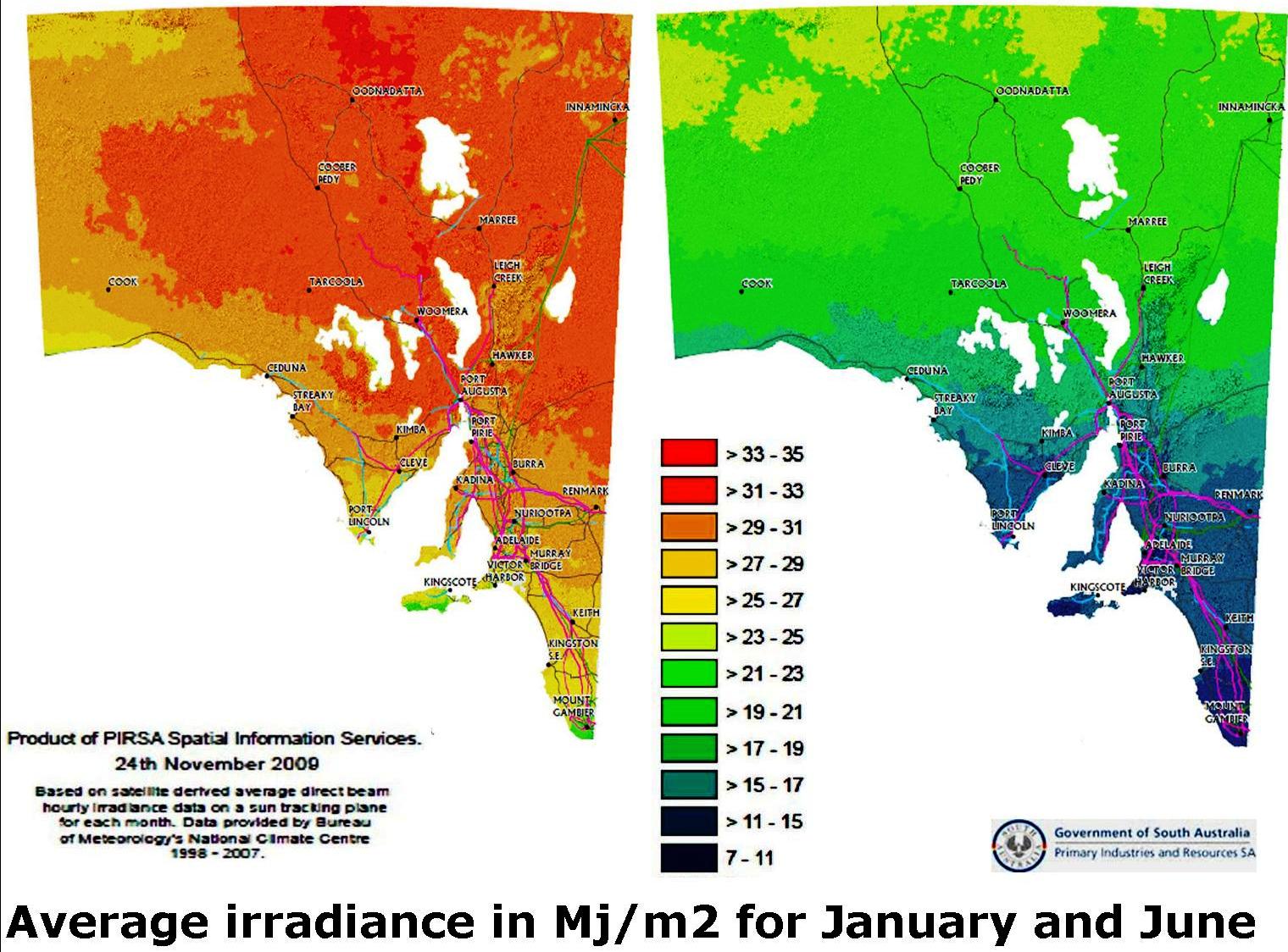 It is therefore important to consider where the solar panel is to be placed so it receives the maximum amount of sunlight. It is ideal to position the panel facing North in the Southern hemisphere.

Obviously one should not choose a shaded roof area.

If the area is too shady or it is difficult to achieve north then a heat pump or a condensing gas boiler could be an option.

If you remove the summer months then the overall efficiency will seem quite low in comparison with the efficiency gained throughout the year.

If the solar panels were to be sized for the winter months they would have to cover a larger area to catch the limited sunshine.

The water stored in the solar panel or solar manifold will only cool once the hot water in the tank has been used and replaced with cold water from the mains.

Therefore the solar panel is always sized using the best month and the amount of people using it. 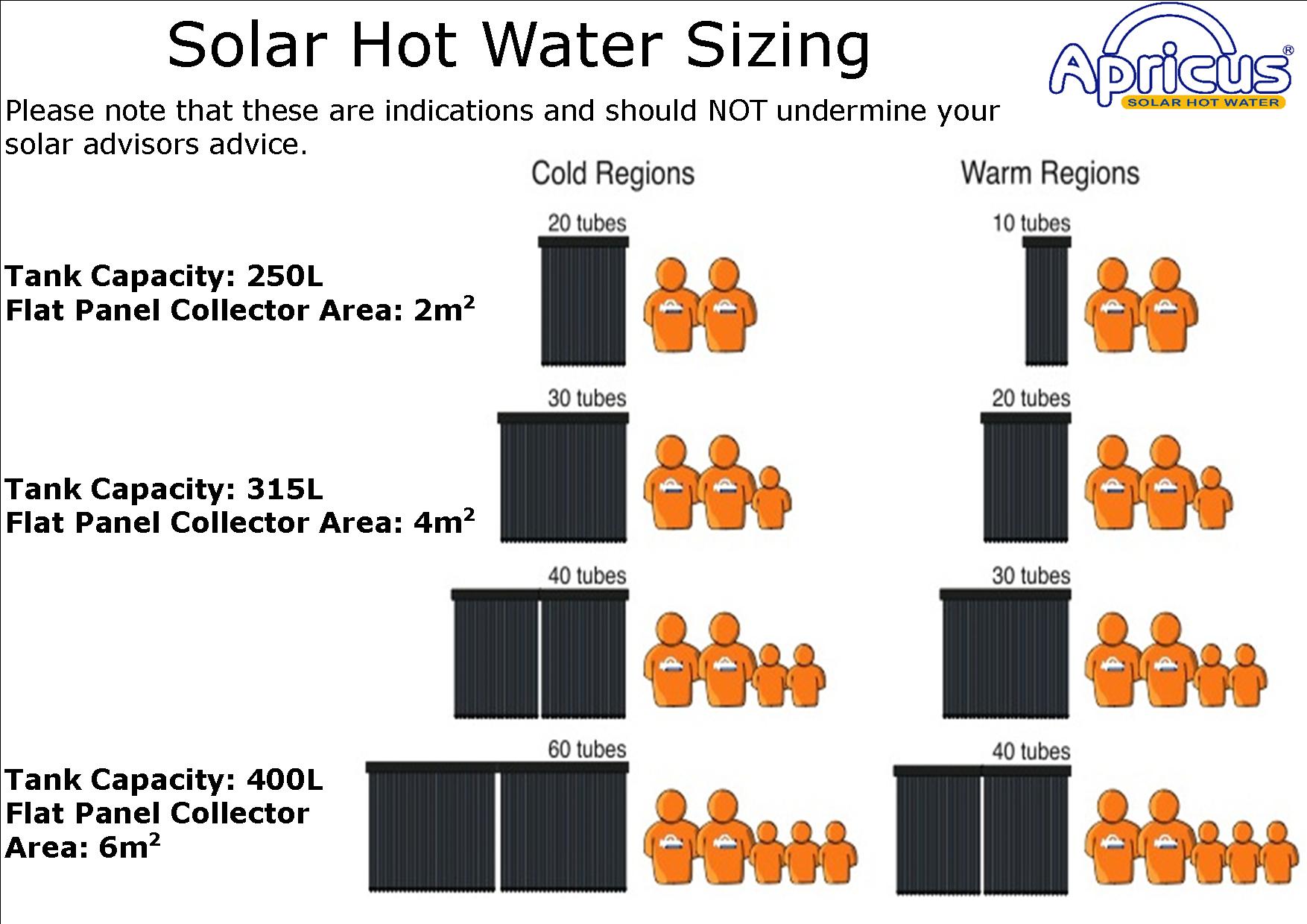 There are two main types of solar collectors available namely the flat panel and the evacuated tubes. 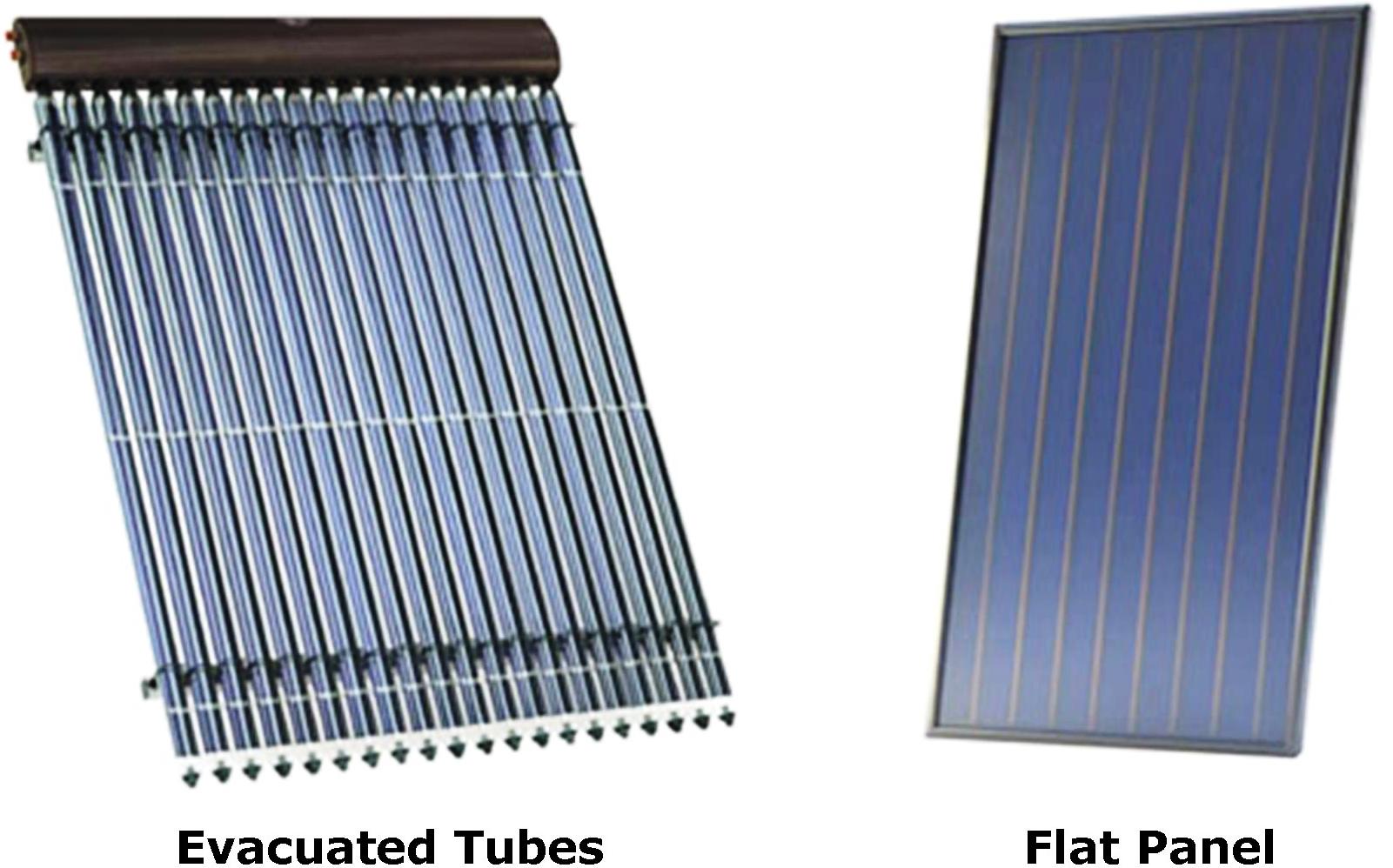 Both evacuated tubes and flat panels have advantages and dissadvantages.

The two main advantages of evacuated tubes are they are cylindrical allowing the sun to always strike at them at 90º and because the water is not circulated through the tubes there is virtually no heat loss and therefore lalso less change that the water can freeze during the winter.

The two biggest advantages of flat panel solar collectors are: they are easier, and therefore cheaper to install, and many people find that they look better on a roof resembling a skylight.

With flat panels there can be less than 2L of water circulating through them therefore heat loss is also kept to a minimum.

Technologies on flat panel solar collectors are being improved upon all the time.

Some areas in South Australia are prone to frost. Because solar panels are exposed to the elements the water contained in the piping and in the panels can freeze and cause damage.

To prevent frost damage a closed loop system is sometimes used. This differs from an open loop system by circulating glycol through the solar panel instead of water.

In open looped systems a frost valve can be installed to provide some frost protection.

Water, once frozen begins to expand at -4ºC. At this temperature the frost valve opens and drains the water from the solar panels.

Whilst considering the differences between evacuated tubes and flat panels it is interesting to note that the Renewable Energy Certificates (REC's) can almost be the same amount for both systems.

The amount of REC's awarded per solar system or heat pump is based on how efficient that product is per climate zone and the size of that system.

Below are two tables taken from the Federal Governments REC's calculator .

Both were taken from the same RECs zone using the same postcode on the same day (because REC's can fluctuate over time).

system but it does not show the quality.

Basically if the number of REC's awarded for two products does not differ much but the price does, then one might want to gather some extra information ie. is a closed loop system being compared with an open loop system. 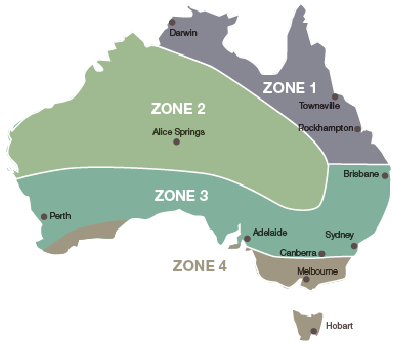 For all service or repairs to existing hydronic heating, gas or hot water units and installations

To learn more about the installation of new gas, hot water or hydronic heating units and systems :

Please note this is a South Australian based business.

How important is Insulation? 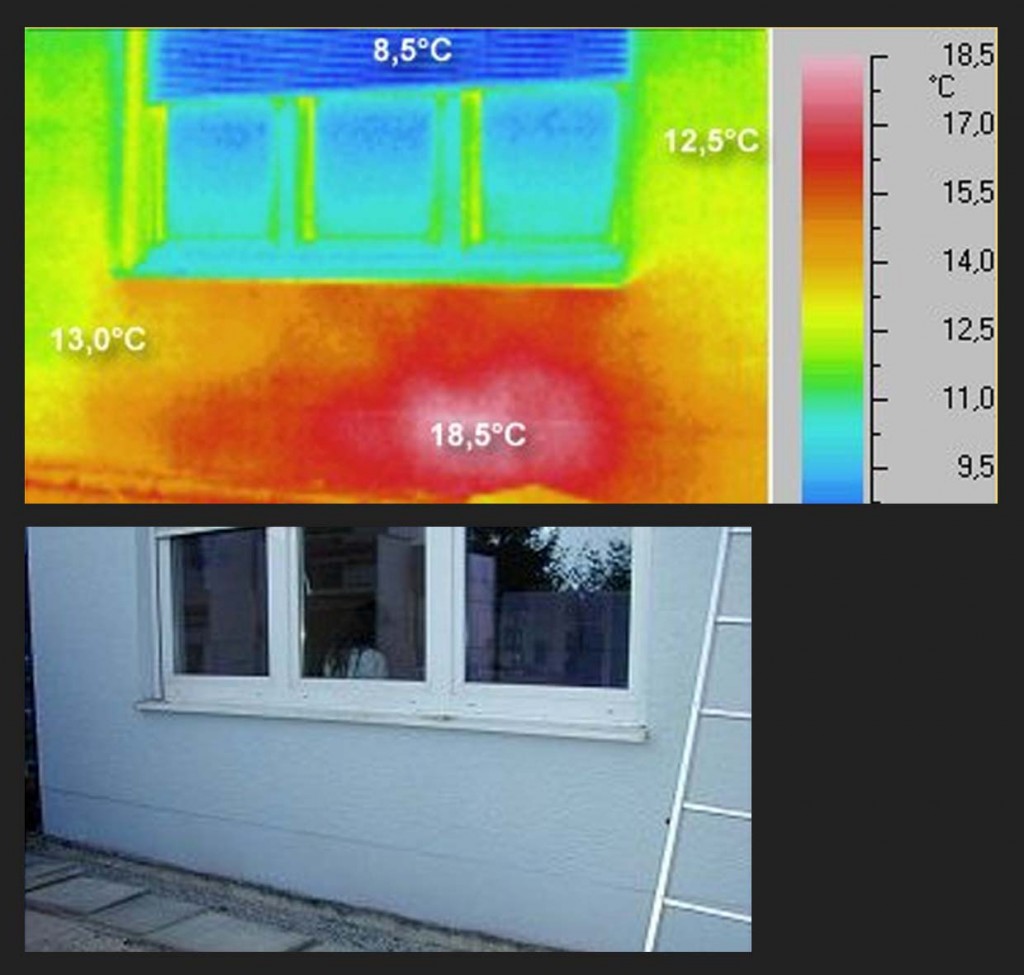 If we visualize our heating system as one side of a coin then the other side is insulation.
Without adequate insulation it is like trying to fill a bottomless pit, no matter what heating system is installed.

A well insulated home can cut energy bills of up to 50%.

The above infra red picture shows both the advantage of double glazing and the dissadvantage of a poorly insulated wall. The type of heating used are wall hung radiators. 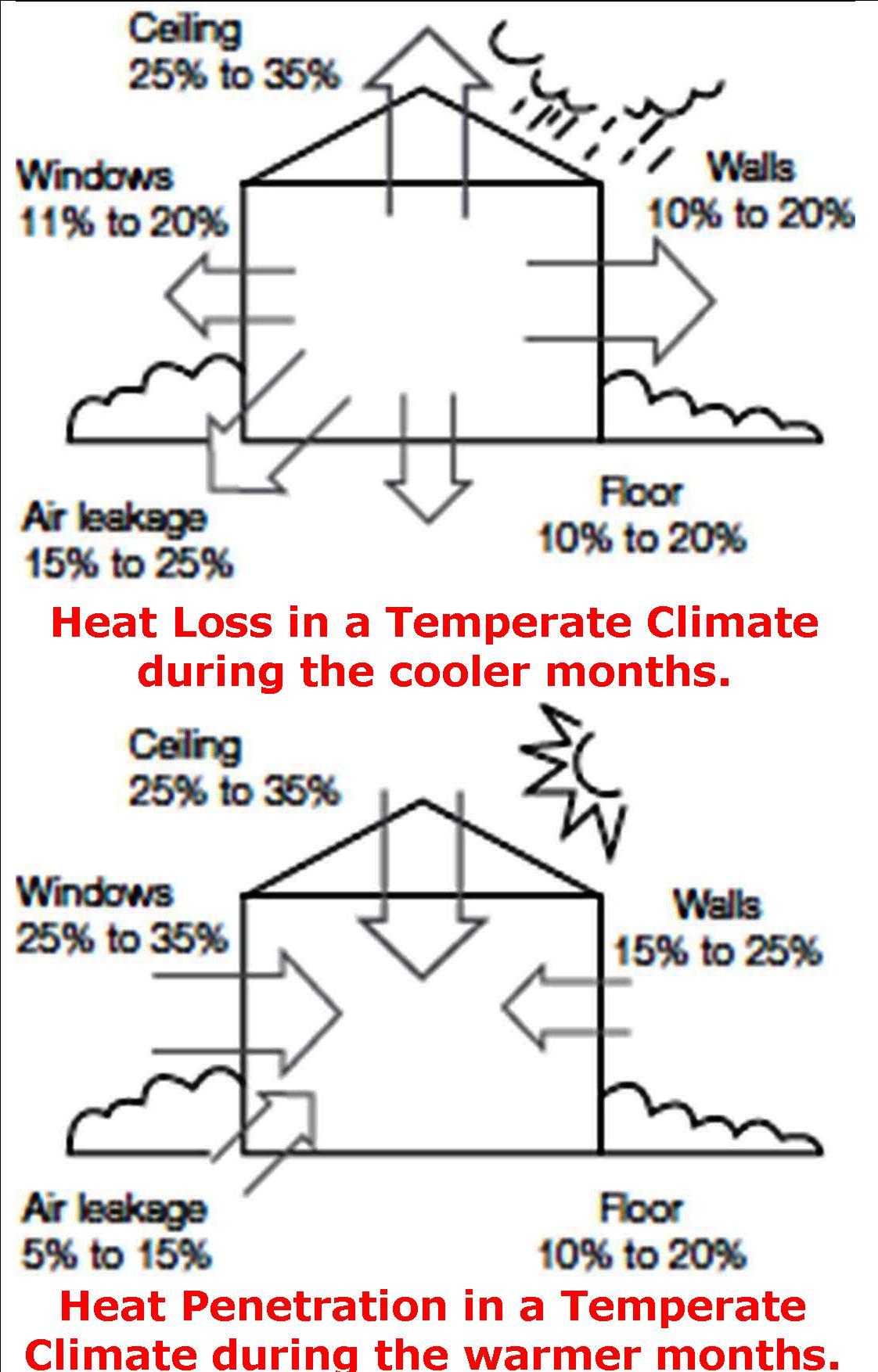 How is insulation measured?
The R value is a measurement of how quickly temperature flows through a material, travelling from hot to cold.

Therefore every material has an R value. Materials with a high R value are insulators and those with a low R value are conductors.

The greater the difference in temperature is the faster the heat transfer will be.

In the winter that would mean hea travels from inside to outside and during summer the reverse occurs. Hence for winter there is an Up R Value and for summer a Down R value.
For heating purposes the Up R value of insulation is of importance.

The Total R value is the sum of the R values of all the materials.
E.g., for a wall it could include the sum of R value's of the plasterboard, air gap or vapour barrier, insulation and brick or brick veneer. 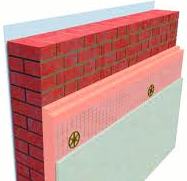 The minimum total R value is specified by the Building Code of Australia (BCA) and is dependent on the climate in which we live, Adelaide being in the mild to warm temperate zone.

Insulation values drop closer to the sea because coastal climates are generally milder than inland climates. 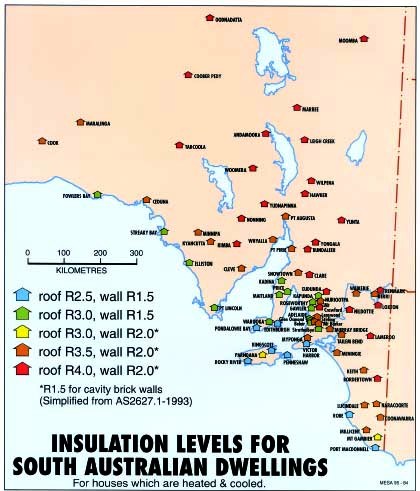 It is always a good idea to exceed these values where possible. 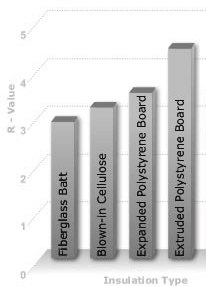 Hot Water and Hydronic Heating piping and save!

The photo below clearly illustrates the heat loss of uninsulated pipe work running off a hot water storage tank.
From the tank there is virtually no heat loss due to the thick blanket of insulation surrounding it. 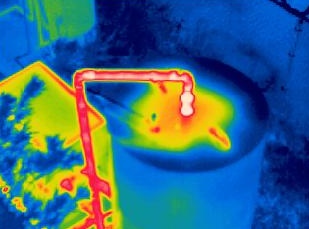 All hot water and heating pipes should be insulated against heat loss.
Insulation can raise your water temperature by about 16ºC to 20ºC depending on the R value of the insulation.
This allows for a lower water temperature setting.
You also won't have to wait as long for hot water when you turn on a tap or shower head, which helps conserve water.

Insulation should be inspected against (UV) damage, particularly if exposed to the elements.

Should you wish to have your boiler, pipe insulation or hydronic installation serviced or inspected please contact me for an appointment.
maintenance@adelaidehydronicheating.com.au